Paula Hippolyte-Bauwens, recounts her experience during an Exposure and Dialogue Programme in Ghana 2015. 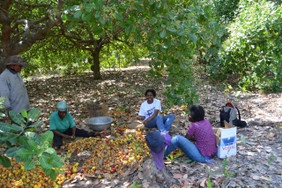 From the 8th to 14th February, 2015, ACi and the Exposure and Dialogue Programme Association organized an Exposure and Dialogue Programme on "Social and Economic Impulses through the Cashew-Industry in Ghana". Altogether, 11 participants from African, Carribean and European public and private organisations spent three days and three nights (Exposure) with cashew farmers in the Tain, Wenchi and Jaman Districts of the Brong – Ahafo Region. Following the Exposure, participants reflected on their experiences and activities they were involved in during the previous days of exposure. The programme was summed up with a Dialogue workshop with stakeholder and experts of the Ghanaina cashew sector.

Paula Hippolyte-Bauwens who is the first secretary of the Embassy of the Eastern Carribean States to Belgium and the EU, was one of the participants of this programme. She shares her experiences below:

"My experience in Tain District and in Accra during the most recent EDP/ACi programme was a life-influencing experience, as I like to describe it, because it is one of those experiences obtained within the framework of professional exercise, but which impacted me for life. The learning curve in terms of cashew production, promotion of quality and challenges faced by the cashew industry as a whole, was a steep one, which was necessary for proper comprehension of the African reality. It was also an opportunity to understand how the African Cashew Experience could also be relevant to the Caribbean in a Small Island Developing State context, which is mine.

Beyond the professional exercise, the experience I had living and working with a farmer who faces adverse conditions but who lives a life of dignity, was most extraordinary. The depth of the person also struck me – more than just a farmer, more than just a worker, their life stories were the stories of many, no matter where they grew up or which part of the world they happened to live in…I could have identified with it, the human relations, the challenges and the hopes. Of course, it was a challenge to be propelled into a different world where traditions, practices and norms seem unconnected with the fast-pace of so-called development. The frequent power cuts that plunge homes and lives into darkness until the timid light of the morning gives way to a burst of relentless heat, structure (or limits) peoples’ activities around the sunlight. However, the deep respect for the elderly and for traditional customs such as the authority of Nana or the village chief is awe-inspiring. The back-breaking farm work or household work served to remind me of the distance development has taken some of us away from poverty, yet paradoxically, too far from the bliss of hard work that produces sweet sleep at night.

For me, the cashew life experience was unforgettable: how life can be woven around the cashew farm, to the extent that the trees can take on the resemblance of one’s progeniture…and represent one’s life. Much ground has been covered by the ACi and its partners in terms of the production and promotion of good quality nuts in Ghana…there is still much distance to go, with the development of by-products and value addition. I therefore look forward to a meaningful exchange of experience between Ghana and Saint Lucia in cashew nut production and value addition."